Bandung is all about being a popular weekend destination for locals and for travelers as side excursions as it is located just a drive away from Jakarta.

The food here is cheap and delicious while there are many cheap fashion shops like factory outlets as well as other tourist attractions. The whole place has evolved among tourism industry and you can be sure to find many things to do and many things to buy here.

-> Check out Where to Stay in Bandung

Bandung is in West Java, Indonesia and being a capital there it is the third largest city after Jakarta and Surabaya. Well known for as a shopping haven, locals and travelers alike will go to Bandung for a good bargain and lots of shopping.

Though yes many only come to Bandung for the main reason of shopping, there are a few tourist attractions and interesting places in places that is worth a visit. In the recent years, Bandung has also emerged as a young and vibrant city, boasting chic and hip cafes, restaurants and also places to stay.

Villa Isola – built by an Italian millionaire and perched at the northern part of Bandung overlooking a breathtaking view of the city to the south.
Gedung Merdeka – another architectural wonder built for the rich previously and then made famous for hosting the first Asian-African conference.
Gedung Sate – built and used by the Dutch companies, it is popular for its satay food decoration. It has 6 ornaments symbolizing 6 million guldens. Now it is used as the office for West Java governor. Luckily, the place is open to public and don’t forget to have a good chill and drink at the top floor while overlooking the city. Here are the list of recommended shopping places in Bandung:

Stays here range from high end to mid-range hotels to hostels, B&Bs and budget hotels or hostels. Being a fairly popular travel destination for both locals and foreigners, Bandung does not lack in choices of place to stay. Most people like to stay in the center of Bandung for easy access to shopping and food, but if you are looking for a relaxing and tranquil getaway, a little up north are some beautiful retreats, with quicker access to tourist spots

Agoda.com * is a great choice because they have the most extensive hotel listings in Asia with great deals.
Booking.com * is a favourite of many because it offers cancellation allowing flexibility. Much of the food found in Bandung is Sundanese in origin and although you may find similar dishes across Indonesia, the Bandung varieties are usually unique in their own right even if they can’t claim to be the original version of the dish.

As Jakarta to Bandung is a popular route, you may find many options to get there.

You may also take the many bus from Jakarta to Bandung, again with many choices of operators and time due to its high demand. But the most convenient and comfortable bus is the non-stop air conditioned bus (express bus). Main bus terminal in Bandung is Leuwipanjang, with buses from Jakarta, Bogor and surrounding while the other bus terminal Cicaheum has buses coming from Cirebon, Banjarm Pangandaran and even Bali islands. If you want to fly into Bandung, the international airport is Husein Sastranegara with several airlines serving this route for international flights like Air Asia, Batavia Air, Garuda indonesia, Silk Air and also domestic flights like Lion Air or Merpati Nusantara Airlines. Bandung Indonesia airport is close to the city center ith taxi fixed at 43000Rp.

If you would brave the traffic in Jakarta or probably coming from elsewhere, you may drive from Jakarta to Bandung in just 2 hours. Just take note of the possibility of floods during rainy season and really heavy traffic jams during weekends. You may take a further alternative route via Puncak and Cianjur if you have the time and have a pit stop at the highland for a view of tea plantation before continuing. Here you may also check out Bogor and the Taman Safari Indonesia.

If you do not want to drive but still take the car, it is possible to hire a taxi to take you there, be it with meters or a fixed price but beware of being overcharged or scammed. Check out transports in Indonesia for proper tips on choosing the right taxi and how to get around generally. 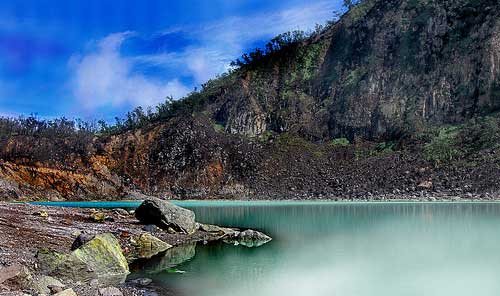 Kawah Putih
2 hours from Bandung city center, the lake is a stunningly beautiful with setting from a movie. Being the highland it is also cooling but beware of sunburn too cause regardless it can still be pretty sunny. This is a sulphuric lake as it is from a volcano.The entire area can be explored in 30 minutes.

Tangkuban Perahu
About 1.5 hours from Bandung, it is yet another crater from volcano of Indonesia that is worth the visit for the sheer awe of the view from the top. Photo credits from top: Burmesedays, sektrodua, nomilknocry, No Dust and firmatography